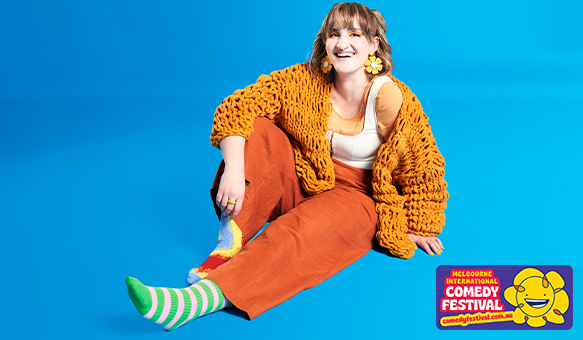 After sold out shows in Adelaide, Melbourne and Sydney of her award winning, debut show I Hope My Keyboard Doesn’t Break, Gabbi is back with her second solo show, filling even bigger shoes, lest she get lost in the wash.

Odd Sock is an hour of original musical comedy, stand-up and storytelling with Gabbi’s usual observational anarchy. The keyboard is on, the mic is hot and the socks are odd cause she was running late leaving the house. It’s balladeer meets berserk with Gabbi’s warm, soulful vocals distracting you from the fact she’s probably singing a whole song about feet pics, which you are NOT getting by the way.

Gabbi won Best Newcomer at the 2022 Sydney Comedy Festival, was a 2022 Moosehead award recipient and has appeared on The Chaser, A Rational Fear, and Spicks & Specks (ABC TV).

"Gabbi is legitimately a good composer and lyricist" - Wayne Brady, Whose Line Is It Anyway