Closed for lockdown, back on Friday 18 June. See you then! 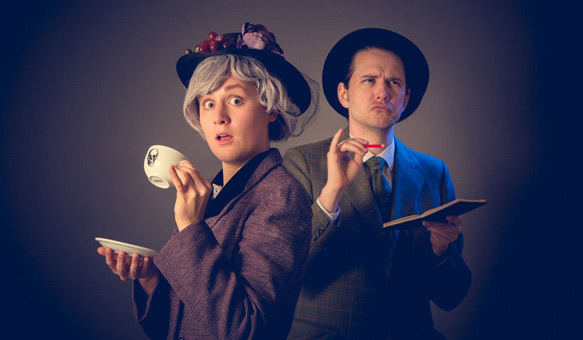 Step into the world of a classic English murder mystery. Murder Village: An Improvised Whodunnit is the critically-acclaimed improvised comedy experience that brings the world of Christie to life, complete with mysterious characters, devilish red herrings, clever clues, and an amateur sleuth always on hand to outsmart local law officials and solve the case themselves.

Each performance sees a new whodunnit spun from the mind of Melbourne’s best improvising comedians. Hailing from The Big HOO-HAA!, Impro Melbourne and Impromptunes, these hilarious performers weave your suggestions into a fiendishly clever puzzle for you to solve. Your votes decide via secret ballot who lives, who dies and who will be unmasked as the killer. No two shows are ever the same!

“Highly recommended – silly, clever, unexpected, the audience was glued to their seats for the whole 60 minutes. See it at least once!” – Pop Culture-y

“An evening where reveling in death and murder is turned into wholesome fun.” – Stage Whispers

"You can bet your life that seeing Murder Village will be the perfect show to end your evening." – My Melbourne Arts

“Unravel the perfect recipe for murder with this hilarious improvised production.” – Weekend Notes

"A laugh-out-loud, rollicking good show; who knew murder could be so entertaining?" – The Plus Ones

Please arrive at least 30min before the show to facilitate contact tracing.