this moment in time 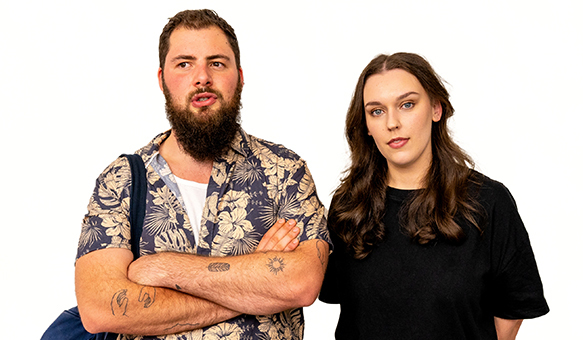 When two random strangers arrive at the airport, they’re primed to expect the inevitable delays of the Summer rush. After her annual visit home, Sam lugs a suitcase full of standard-issue family guilt back with her as she heads to a life and partner in New York that she no longer wants. And Theo, annoyingly optimistic and desperate for a distraction, has fallen down the rabbit-hole while overthinking his recent break-up. Striving to be the perfect man that always seem forever out of his grasp.

Inspired by real conversations had in airport terminals, this premiere season by writer Alistair Ward invites Melbourne audiences to experience a very personal and intimate tale of painful truths, trust, and laughter between two strangers. Because if you’re not learning life lessons in transit… you’ve probably stalled.

An emerging company, Pansy Productions launched in 2021 with a goal to produce work that offers a glimpse of different world views, and sheds light on our common humanity. Initially creating in- house works, the company aims to produce and support work from emerging writers, while providing opportunities to other artists in the wider community, in the future. Following in the footsteps of other admired and vital production companies.