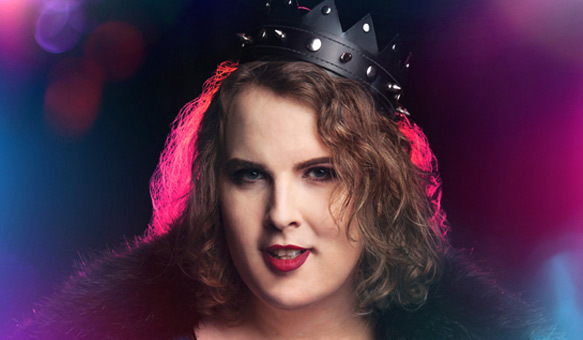 Anna Piper Scott, Golden Gibbo nominee and fierce queen of the stand-up scene is here to destroy myths about transgender people and make you cry-laugh while doing it.

Queer & Present Danger is everything you've ever wanted to know about being a trans woman, courtesy of one of Melbourne's sharpest comedians.

Anna shares real life experiences that are awkward, empowering and everything in between – from trying to understand the arbitrary nature of women's sizing to people suddenly being very curious about your genitals.

Anna demystifies trans life for cisgender folks, and gives transgender folks some sweet comebacks. After all, you learn a lot when you've gone through puberty twice.

'One of the best comedy shows I’ve seen since Nanette – hilarious, gut-wrenching, heartfelt comedy. You MUST see this show!' Georgie Stone, Neighbours

'Celebrates the joy of transition.' The Australian

'Sassy and assertive… the most feared and revered comedian.' Pop Culture-y

'The queen of snark.' Gutter Culture

'Honest and empowering.' The Plus Ones

'A cool drink of water on a hot day.' Squirrel Comedy