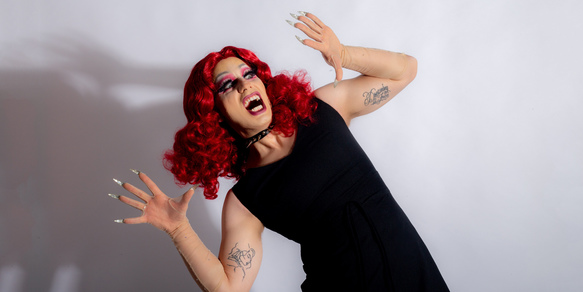 Bathsheba - a witch and not-yet-apprehended serial killer - is an optimistic (albeit unstable) aspiring starlet who moves to Los Angeles in the hopes of becoming a big, big star. While working an office job to make ends-meet, she spends most of her spare time rehearsing famous scenes from films like 'Mommie Dearest' as preparation for auditions...should one ever actually pop up.

Due to severe isolation her only confidant is a porcelain doll which she, of course, names "Meryl". Things reach a boiling point for Bathsheba after a disastrous audition and consequential rejection with a casting agent.

Bathsheba: Queen of Hollywood is a black comedy that marks the fourth production at The Butterfly Club from the performer behind 'Anita', 'Little Edie' and 'The Black Dahlia'.