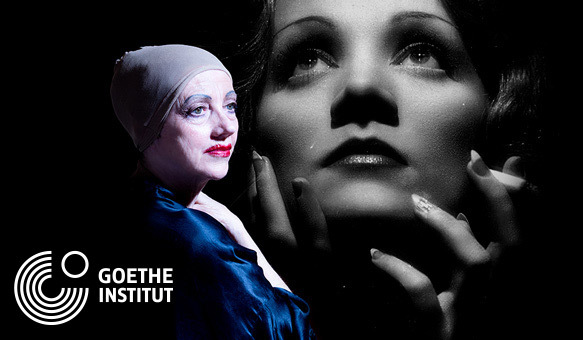 Most of us know something about her. The glamour, the gaze, the voice. The many lovers. The ambiguous sexuality. All true. But the celluloid goddess oozing sensuality was an illusion created by Josef von Sternberg and painfully maintained by Dietrich to the end of her life. Her personal background, too, was altered and left to speculation, not least by Dietrich herself: “I like the legend.”

Here the authentic Dietrich, aged 74, prepares for her last concert. Juxtaposed with her celluloid image, she reveals herself in her own words and in snippets from her famous songs, taking us on a self-deprecating journey through her life. What emerges is a woman of substance who, despite her prickly persona, is vulnerable, affectionate, and above all likeable.

“The legend of Marlene Dietrich was the substance of dreams.” Noel Coward

Supported by the Goethe-Institut